History of the Sojuzpushnina brand and auctions

The history of the Sojuzpushnina brand and auctions begins with the 30s of the twentieth century and has an eventful history.
Its appearance was a logical step, because Russian furs have always been highly valued abroad. The government understood the need for economic development of the country. That is why it was interested in exporting fur products.

The first deliveries of furs to foreign auctions in Leipzig, London, and Copenhagen began in 1918.
During this period, cooperative, state-owned and joint-stock organizations were engaged in exporting. However, it was not profitable to sell furs through commission agents.

The first success that allowed thinking about creating a domestic auction came in 1921-1922 in Leipzig, when foreign manufacturers highly rated the Soviet fur. Everyone understood that the demand for Soviet furs would grow.

In 1926 the matter of creating a domestic fur auction was widely discussed in soviet press. Leningrad, Vladivostok and Archangelsk were put forward as possible locations for conducting the auction. However, various problems prevented the resolution of this matter; the main problem being that the furs export business was in the hands of a great many companies that did not coordinate their activity. Foreign markets and buyers were insufficiently studied and necessary skilled personnel were lacking. 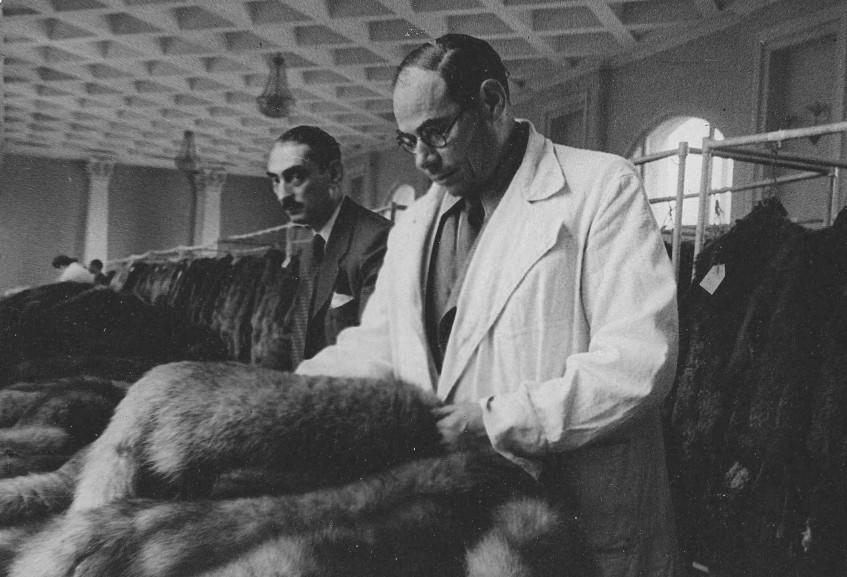 In 1930, the government established the All Union Fur Syndicate, the main function of which was to centralize the export of furs on the market.
On October 24, 1931, the Syndicate reorganized into the All Union Fur Association «Sojuzpushnina», which monopolized the sale of Russian furs on the world market. Thus, the idea of creating an auction was implemented.

The first auction was organized in Leningrad in March 1931. 78 representatives of 67 foreign companies from 12 countries attended the auction. At the auction, 95% of the furs were sold at prices on the average 6-8% higher than those of the London auction that had taken place in February the same year.

The Leningrad fur auction made it possible to freely maneuver cash resources, facilitate the selection and compilation of the auction collections, but the main benefit was that it provided a solid export base and allowed working without intermediary centers.

The organization of the Leningrad fur auction was a serious competition to the fur markets of Leipzig and London, the importance of their intermediary functions has significantly decreased. The Western press of that time called for a boycott of purchases of Soviet fur and fur goods, but these campaigns did not achieve their goal, the Leningrad auction continued to gain momentum.

Since 1932, fur auctions in Leningrad began to be held twice a year – in early March and in August, and since 1935 – in March and June.

Due to the wide variety of furs, as well as its large volumes and excellent organization, the Leningrad auction began to attract an increasing number of companies from around the world every year. Since 1933, the scope of the auction has expanded: foreign companies began to supply their fur products for sale at Leningrad auctions.
In November 1935, Sojuzpushnina actively started exporting and importing fur raw materials, tanned and dyed fur goods, and finished garments. The first buyers were such companies as «Solomon»(France), «Shakman» (Great Britain), «Torrack and Holonder» (Germany), «Samaletdin» (Sweden, Finland), «Stanford»(Great Britain), «Oscar Vigen» (Sweden) and many others.

The 12th Leningrad fur auction of 1937 became a record in comparison with other pre-war auctions. 189 representatives from 163 companies from 15 countries came to this auction. The auction was attended not only by the main tradesmans, brokers and commission agents, but also by manufacturers, owners and representatives of various department stores. The novelty of the auction was that for the first time the auction was conducted in English, before that only German was spoken.

Pre-war auctions were held in various public and historical buildings of Leningrad. Auctions were held in the Russian Museum, in the building of the former stock exchange, in the halls of the Academy of Arts, in the Astoria and European hotels, etc.  And by 1939, a special building was built for auctions, called the Fur Palace. 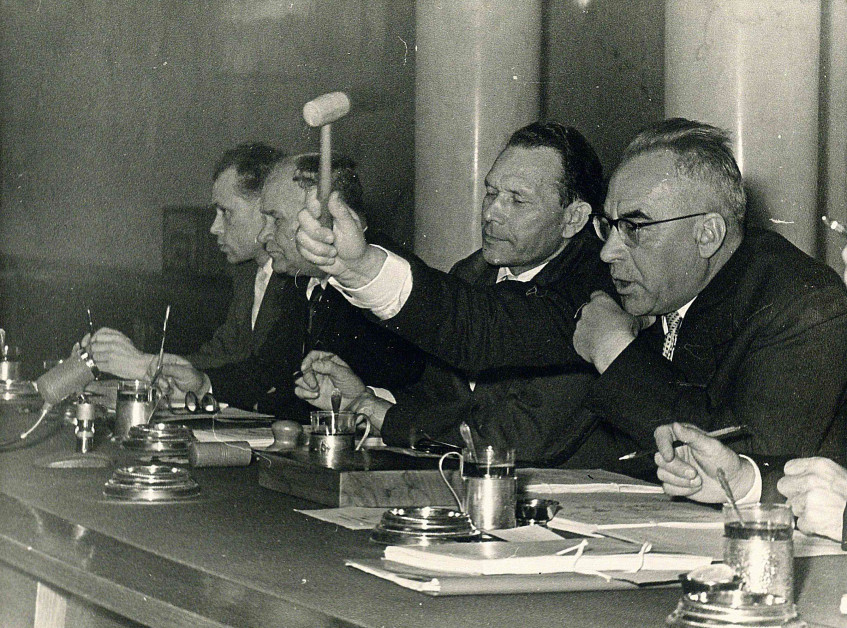 With the approach of The Great Patriotic War, Sojuzpushnina was moved from Leningrad to Novosibirsk where it continued prepare furs for export.

The first post-war Leningrad fur auction was held in 1947.

Despite the long break in auction activity the main customers were very active and over 80% of furs were sold at the auction sales. 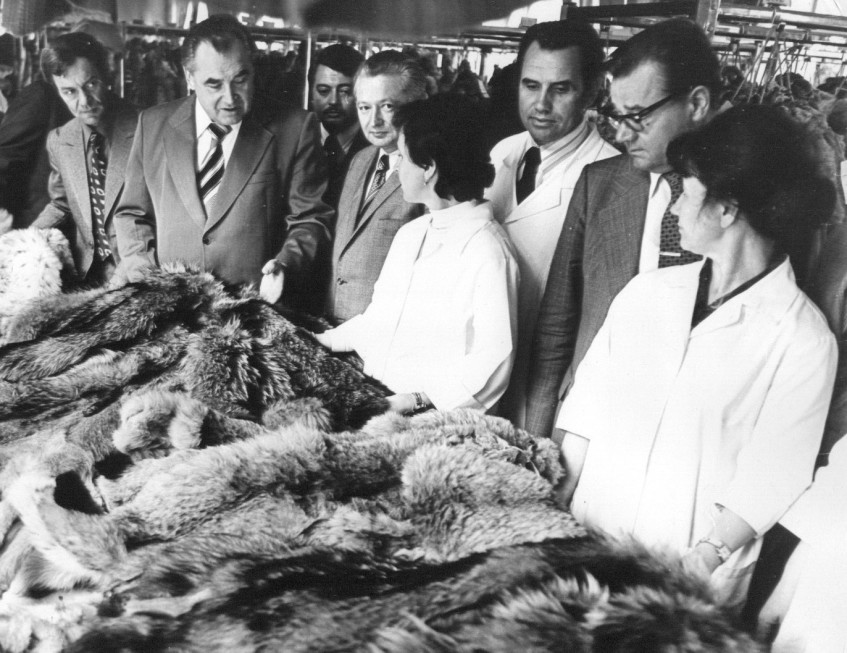 In the 60’s-80’s «Sojuzpushnina» was confidently holding a leading position on the world fur market, and the Leningrad fur auctions drew hundreds of customers from all over the world.

During this period, exports were developing not only due to wild furs, but also due to the growth of production of a new agricultural sector - fur farming (mink, arctic fox, fox, karakul, sable). In fact which was made with the direct participation of the VO Sojuzpushnina.  Mink breeding was a priority. 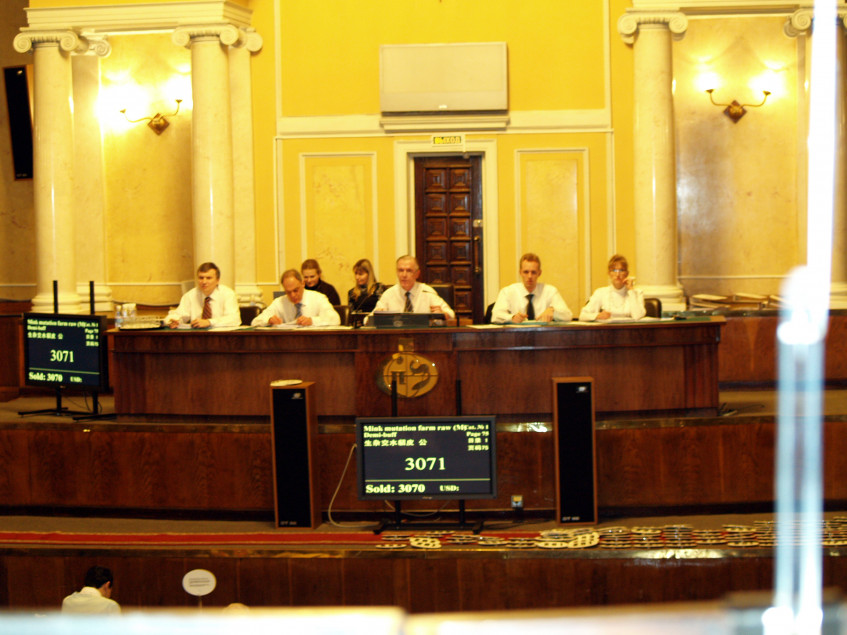 In 1996, Sojuzpushnina again restored its independence as a unitary state enterprise (USE): «Sojuzpushnina» USE.

The rights to trademarks (brand) were transferred to CJSC «Sojuzpushnina» under contracts for the transfer of the exclusive right to Trademarks.